It looks like my boy toy Gnoy has finally finished editing the next episode where the lads interview the creator of Shadow of the Demon Lord, Robert Schwalb.

The Deets on Episode 1

I removed Tom's bite ball from his mouth long enough to get this statement from him:

"In this episode, we talk with the mastermind behind the Demon Lord himself, Rob Schwalb. We chat
about his just-released PunkApocalyptic RPG, a Mad Max-style post-apocalyptic game utilizing the
engine that powers Shadow of the Demon Lord.

We also spend some time chewing the fat about Shadow of the Mad Wizard, a game Rob's designing that also uses the Demon Lord engine but without the Demon Lord setting -- this is set to come out later this year or early 2021. There may or may not be some discussion about Rob's obsession with beets as well -- it's hard to remember everything, as it was a murky haze of alcohol, crack smoke, and sex.

Just listen to it, damnit!"


That Tom, he's such a naughty boy. 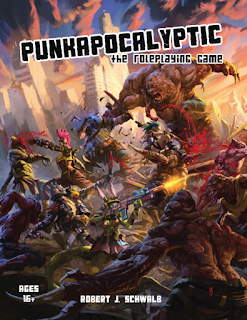 Links to Stuff Talked About in the Podcast

Little Horror House of the Prairie Sick and Twisted on FB: https://www.facebook.com/SickAndTwistedPodcasting/

Tom
cadoredit@gmail.com
Twitter: @cadorette
Twitch: Only if you tickle me...

Closing music "Caught in a Gelatinous Cube" by Loot the Body.
Posted by Grumpy Alice at 9:25 AM No comments:

Looks like that putz Gnoy came through and finally finished editing the inaugural episode of the SNT wherein our hosts ramble stupidly about themselves and their RPG characters in James's Shadow of the Demon Lord campaign.


The podcast has been submitted to Itunes, Spotify, Stitcher and Google Podcasts. Look for it soon in those places as well as Sound Cloud.

Sick and Twisted on FB: https://www.facebook.com/SickAndTwistedPodcasting/

Tom
cadoredit@gmail.com
Twitter: @cadorette
Twitch: Only if you tickle me...

No real show notes this time but look for Episode 1 which will feature the inimitable creator of the Shadow of the Demon Lord RPG - Mr. Rob Schwalb!

Closing music "Caught in a Gelatinous Cube" by Loot the Body.
Posted by Grumpy Alice at 2:00 PM No comments:

We've now recorded the introductory episode and our first episode with the mastermind behind "Shadow of the Demon Lord" himself... Rob Schwalb!

(Now, if only that slacker Gnoy would edit the fucking things!)
Posted by Grumpy Alice at 8:03 PM No comments:

An NSFW Gaming Podcast about horror, fantasy horror, and "grimdark" TTRPGs, along with some other demented gaming ravings and lunatic ramblings mixed in. Listen at your own peril!